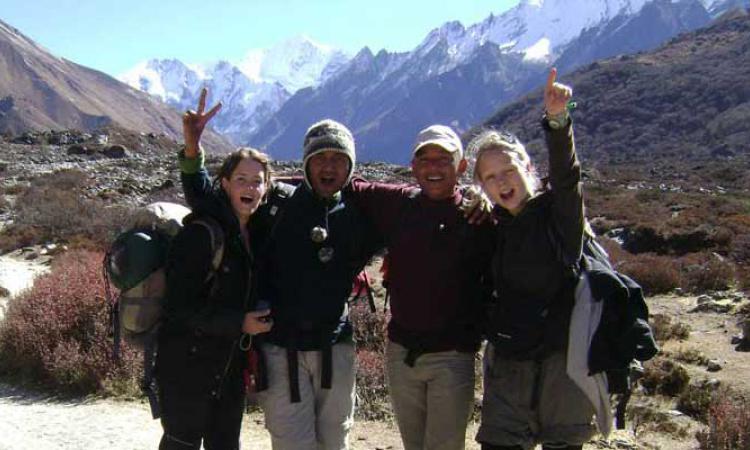 Nepal a tiny country of great contrasts; situated between two large countries China and India, the birthplace of Lord Buddha "The light of Asia" & famed Gorkha warriors. Nepal is also known as the land of Mt.Everest as it crowned by eight of the world’s highest ten mountains over 8000 meters, including Mt.Annapurna, Mt Manaslu, Mt.Makalu, Mt.Dhaulagiri and Mt.Kanchanjunga etc.

Nepal is one of the best destinations in the world for enjoying the real combination of nature and the culture. The centuries old cities, panoramic views of the Himalayas, an incredible variety of ecosystems: steamy jungles and terraced valleys, forested hills, frozen peaks and high altitude deserts. Tropical flowers frame views of not so distant snow peaks; tigers and rhinos roam lush jungles while less than 150 km north, snow leopards prowl barren mountain slopes. Dozens of different ethnic groups live among its hills, each with their own language, costumes, customs, and beliefs.

Today, over 700,000 tourists come to Nepal every year to explore the spectacular landscape, rich culture, and harmony of traditional way of life. In terms of statistics Nepal is one of the least developed countries in the world, but it’s rich with humor, warmth, and natural beauty. Visitors are drawn here by the amazing landscape, but they leave remembering the friendliness of the people.

Nepal is 885 km long from east to west and only 150 to 200 km wide north to south with total area 14718 sq. Km, its border touches Tibetan Autonomous Region of China in the north and India in the east, south and west. Sandwiched between China and India, Nepal is in a ticklish spot. Nepal is like a Yam between two rocks. Geographically, Nepal has divided into t hree regions, the Terai region (17% of the total land of Nepal), the Hilly region (68% of the total land), the Himalayan region (15% of the total land), each with its own distinctive environment, peoples, economy, customs, and culture

There are 80,000 scattered villages and hamlets, life has changed little now. There, people still raise their own food, build their houses from local materials, rely very little on cash, and seldom see much of the world beyond their own particular valley. This is the real Nepal, and no one who visits only the capital can claim to have understood the country. Trekking is the best way to immerse you in village life, but even the hamlets of the valley provide a glimpse of the timeless rural reality.

There are two main religions - Hinduism and Buddhism, two races- Caucasoid and Mongoloid and two civilizations- Indic and Sinic. Nationwide, religion follows the pattern of Hindu lowlanders and Buddhist highlanders, with the people of the Hills exhibiting a mixture of both.

On entering a Nepalese home it is polite to remove your shoes. Visitors to Hindu temple or Buddhist shrine are expected to shoe off as a mark of respect. In fact, a pair of open sandals is more convenient and comfortable while visiting the temples and stupas. In some of the temples, entrance may be prohibited for the non-Hindus. Leather items are prohibited inside the temple precinct. It is better not to touch offerings or persons when they are on way to shrines. Walking around temple or stupa is traditionally done clockwise. Generally, temples, stupas, peoples and monuments are permitted to be photographed but it is better to seek permission first. It is better to be decently clad when visiting any place. Sun and beach wear is not ideal when roaming around the city/village. Short shorts, shoulders and backs may not be appreciated. Public displays of affection between man and woman are frowned upon. Do not do anything that is totally alien to our environment. We are hard on drug abuse, trafficking, and possession of drugs is taken as serious offences. Cheap charity breeds beggars but does not solve their basic problem. Therefore, do not encourage beggary by being benevolent. In the northern hill area, polyandry system, the custom of a wife having more than one husbands, is also practiced till recently. Widow re-marry is not socially acceptable in the society still. Polygamy system is still in practiced, although it has banned by law.

People Nepal, "a garden for all types of people". It's steep mountains and isolated valleys preserve a complex mixture of ethnic groups, castes, and tribes. The national census lists 66 ethnic groups. Life in Nepal is people oriented, not run by technology. Nepal is a poor country in terms of money, but in spirit it’s among the wealthiest there is. .

One of the ethnic tribes, has become a synonym for porter or expedition worker, mainly live in the mountains of eastern and central Nepal, particularly in Solu Khumbu region. Their traditional life combined yak herding, barely and potato farming, and trading with nearby Tibet. Originally, they emigrated from Tibet nearly 500 years ago. They are serving as guides and expeditors for the developing trekking and expedition business. Today the "Sherpa Mafia” dominates the trekking trade, and Sherpas are among the most prosperous and successful of all Nepali.

Bahuns and Chhetris are the two largest Hindu castes; and live throughout the Country. Men wear the janaai (sacred thread) diagonally across their chest, symbolizing their ritual purity and the "twice born" state of the upper castes. Brahmans are supposed to honor a number of ritual prohibitions-they shouldn’t eat onions/garlic/tomatos, drink alcohol-but these taboos are now ignored. Chhetris are specializing in military and political affairs.

The Newars are the indigenous ethnic tribes of the Kathmandu valley. Originally Buddhist, the Newars are now predominantly Hindu. Newar society is divided into 64 occupational castes and hundred of sub castes.

The Gurungs and Magars are the other ethnic tribes, live mainly in the foothills of the Lamjung and Annapurna Himal, and around the southern slopes of the Dhaulagiri Himal. The Magars and Gurungs often find as soldiers in the famous Gurkha regiments.

The Rais, Limbus, and Sunwars inhabit in the eastern hills and many have migrated to the eastern Terai. They are easily identified by their striking tilted almond eyes and flat Mongolian features.

Tamangs are also concentrated in the hills surrounding Kathmandu valley. They work as drivers, rickshaw pullers, carpet and thangka makers, those in the Hills remain farmers and porters. According to an account their ancestors were Tibetan horse traders who eventually settled in Nepal, hence the name Ta-mi (Horse People).

The Thakalis are natives of the Thak Khola region near Annapurna in central Nepal, and the Thakali are known as aggressive traders. Originally they are Tibetan Buddhists, influenced by shamanism, but many have become Hindus in recent years. Thakali women are famed for their spic- and span lodges and tasty food.

Tharus: One of Nepal’s few indigenous tribal peoples, as opposed to ethnic groups, the Tharu are based in the Midwestern Terai in forested land along the southern base of the Siwalik Range. Tharus, Yadavs, Satar, Rajvanshis, and Dhimals are spread generally in the Terai region

Trekking permit is not essential for the general trekking areas such as the Everest, the Annapurna and the Langtang effective from July 17, 1999. Likewise, rafting permit has been revoked effective from the same date.However, entry fees in the National Parks (Rs1000=US$17) and Conservation Areas (Rs. 2000=US$34) remain unchanged. Other than above trekking area, any foreigner intending to trek in any part of Nepal has to obtain a trekking permit from the department of Immigration through your agent.

All bags have to declare and clear through customs inspection and the airport entry. Visitors are allowed to import the below item for their personal use. Cigarettes 200 sticks, Cigars 50 sticks, liquor one bottle(1.5litre),beer 12 cans; one binoculars; one movie Camera with 12 rolls of film or one video camara;one ordinary camera with 15 rolls of film; one tape recorder with 15 tape reels; one perambualtor,one tricycle; one sleeping bag and one sock. Passengers arriving without any dutiable goods can pass through the Green Channel. Dutiable goods have to be declared at the Red Channel. It is illegal to export goods over 100 years old. The department of Archeology has to certify to export any metal statues, sacred paintings and similar objects before being taken out of the country.